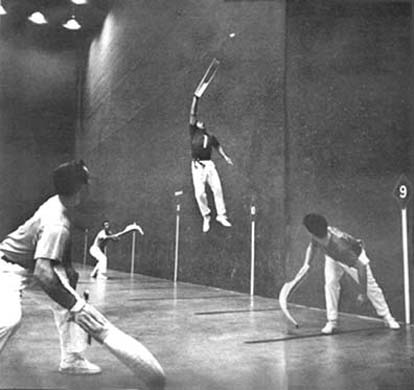 The Basques, who invented it, call it pelota.
A game of great beauty and risk, it enthralls
betting crowds in six Florida cities now and
is attracting fresh athletes around the world
BY JACK OLSEN

JAI ALAI:
FURY
AT THE
FRONTON

Francisco Churruca, the best jai alai player in the world,
flings himself high into the air to catch a ball traveling at
150 mph. When he comes down, he will heave the ball to
the front wall, after which it will become the twisting,
caroming problem of his watchful opponents in white.

"My father he have chickens when I am a boy," said Francisco Maria Churruca Iriondo Azpiazu Alcorta, "and he also have porks. Every morning he goes to his work to make cheeps. Sheeps? You know, barcos that ride on the water? Si, ships! So he tell me you give the animals to eat while I am away. I make the chickens and the porks to eat, and then I drive my bicycle over the mountains to the jai alai. There I must play in the naked feet because if I hurt my shoes, my father will know I am in the jai alai that day. And that is how I begin."
Francisco Maria Churruca Iriondo Azpiazu Alcorta, known to his friends as Patxi, lives four months of the year in a second-floor apartment near the Miami airport and the rest of the year in a colorful home in Motrico, a Basque fishing village a few dozen miles from the Franco-Spanish border. He is a handsome man of 29, with sloping brown-green eyes, a slightly receding hairline and a vague resemblance to the actor Mel Ferrer. Churruca has difficulty with English because his first tongue, Basque, is not even in the same family of languages; he speaks Spanish, his second language, with somewhat greater fluency. He earns about $20,000 a year after taxes, more than anyone else in his sport. Francisco Maria Churruca Iriondo Azpiazu Alcorta, "Churruca" on the betting program, is the world champion of jai alai, a sort of supercharged three-wall handball played with long, curved baskets.
Being world champion of jai alai was, until recently, like being stickball king of The Bronx or downhill skiing champ of western Kansas. The sporting fraternity was inclined to think of jai alai as a gimmick (when they were inclined to think of the game at all), a mere excuse to get $2 down at night when the horses were in bed. But while nobody was looking, the game has achieved a measure of international prominence, and the person who still views jai alai as a local rite played by Basque sheepherders is missing something. The Federaci6n Internacionale de Pelota Vasca, ruling body of the game, is pressing to have jai alai (or simply "pelota," as it is called in the Old World) made a part of the 1968 Olympics in Mexico City, and may well get its way, as the Japanese did with volleyball. Every two years the Federaci6n runs an international pelota championship, drawing teams from countries like Argentina and Uruguay and Italy, as well as those old beldams of the sport, Spain and France. The demand for professional jai alai players has become so great that training schools have been established in the Basque country of Spain, where muchachos of 9 and 10 are carefully groomed for frontons in six cities in Florida, three cities in Mexico and professional arenas in Manila, Milan, Madrid, Barcelona and elsewhere. The game that once was considered on a sporting level with cockroach races now is attracting amateurs in many parts of the world, and even a gringo may rent all the necessary equipment to go out and look like an idiot at "America's Only Amateur Jai Alai Court" in north Miami. 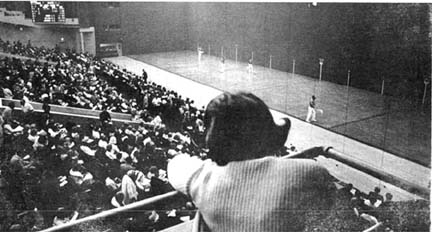 The Miami fronton is 176 feet long, 55 feet wide and 44 feet high.
After it is thrown to the front wall, the ball may hit the side and back walls of the court and the floor.
It stays in play until it hits the floor for the second time or goes out of bounds.

One watches Churruca and his opponents-almost all of them Basques who were brought up around the frontons of the Pyrenees-and one gets the idea that the game is simple. The pelota comes bounding off the front wall. Churruca races into position, takes the ball with a resounding plop! in his cesta, and in one smooth motion slings it back to the front wall. And so the game goes until one player cannot make the catch-and-throw, and a point is scored.
The apparent ease with which Churruca and the rest of the troupe keep the pelota zipping for about as long as two or three minutes at a time occasionally leads the unknowing to shout, "Fix!" when a shot is missed or when a ball spins haphazardly out of the cesta of a star player. Such cynics should be sentenced to one hour on a jai alai court to try the game on for size, as I did. Then they will understand why a jai alai player must begin when he is a stripling, must play the game for six or eight hours a day and must bring himself to a peak of physical conditioning before he has a vestige of a prayer of becoming a professional. Anyone who has ever played tennis can take a crack at racquets or squash or badminton or table tennis without looking too much the fool, but attempting to throw a jai alai ball around without any experience is equivalent to sitting down to a mah-jongg game with your Chinese laundryman.
Not understanding or believing any of this when it was explained to me, I went to the Miami fronton to have a go at this most graceful and most difficult of racket games. My instructor, an amateur, strapped a cesta on my wrist, illustrated a few easy lob shots to the side wall and plunked the ball into my basket. "Duck soup!" I said. I wound up and flang the ball and fell back as it hit the floor in front of me and kazoomed up past my nose. On a second try the ball squiggled out behind me, and on a third it merely fell out of the cesta while I was planning the shot. After a solid hour of instruction, I was able to lob the ball underhand, like an elderly Basque grandmother with elbow chips, till it almost reached the wall. This, I learned later, is about the most an amateur can expect during his first few weeks of instruction. The normal overhand baseball delivery is useless; it only causes the ball to roll up the cesta and follow the curved end downward to the floor. The various methods of propelling a pelota out of the cesta and up to the front wall are so unlike the classical motions of other sports that the Miami fronton has had a standing bet with American athletes for years. The victim is rigged up in a cesta and placed at the service line, some 130 feet from the front wall, and challenged to throw the ball to the wall on the fly once in three tries. "We have lost that-bet once," said Louis (Buddy) Berenson, assistant manager of the fronton, "and then it was to a guy I think had played before.
Withal, the most difficult public-relations problem faced by the promoters of jai alai is the canard that every flubbed shot is a fake. Perhaps such cynicism is inevitable in the only game in which Americans are permitted to bet on human beings, but the fact is that in four decades of jai alai in Florida there has never been a public scandal attached to the game. This is not true in the rest of the world, where the system is different and lends itself to an occasional justified scream of anguish by the bettors. In Florida all bets go through a pari-mutuel setup, and when the game starts, all betting is over, diminishing any further chance of hanky-panky. In toteless places like Madrid and Mexico City, games are halted frequently to give bookies a chance to corral new point-by-point action; hence there is a tendency by players to keep the games close, to excite the crowd and increase the handle. But it is rare in any part of the world for players to lose intentionally; such shenanigans are just not in the Basque makeup. The last known attempt at a real fix took place in Cuba, back in the days before Fidel Castro closed the Havana fronton. Two doubles players agreed to go into the tank, bet heavily on their opponents and then got so excited in the heat of the contest that they won, thus losing their camisas and succeeding in being banished from jai alai forever. 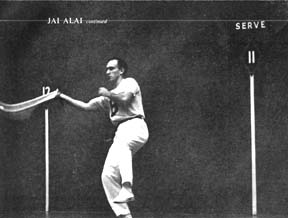 Preparing to serve, Churruca scoops up the ball after bouncing it once.
In the same motion he will whip it against the wall, 130 feet away.