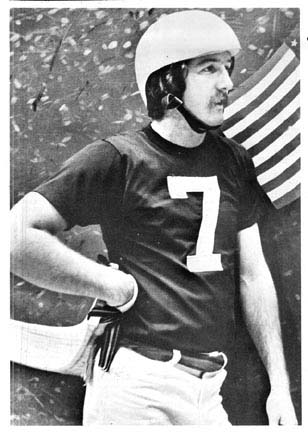 Mazza is one of the few Americans that play at Bridgeport. Don is from the Pittsburgh area. After an apprenticeship in Spain, he played two years at the Miami, Florida Fronton's Training School, where he and Charlie Hernandez (No. 14) were among the first to attend that innovative school. Don is one of the most recent of the Bridgeport players to get married. He tied the marital knot in April of 1977 and even had a special ceremony on the Bridgeport cancha with the entire audience looking on.

Tiger Note: This interview with Donny Mazza is from the 1977-78 Official Bridgeport Jai-alai Souvenir Yearbook (OBJASY).

OBJASY: Don, do you get a chance to practice much nowadays?

MAZZA: Not really, because our heavy playing schedules don't allow for much excess time. I play about 5 games per performance, both evenings and matinees. Occasionally I practice when I try out a new cesta... sort of, to break it in. Sometimes we'll get together to play partido. That I really enjoy.

MAZZA: It's a long version of jai-alai that originated in Spain. We play single point games with 35 or 40 points winning.

OBJASY: You mentioned breaking in a new cesta a minute ago. Just how long does a cesta last?

MAZZA: A basket will last about 10 days in Connecticut. The cold weather and low humidity make a basket brittle much faster, then say... in Florida. In fact, sometimes we wipe them with water before we play, in order to keep the straw damp.

OBJASY: Do you own your own cesta?

MAZZA: Yes. In fact, all players usually own several custom-made cestas, which cost about $70.00 each. They are not supplied by the management because they are expensive and some players might take to breaking them more frequently if they received theirs free.

MAZZA: Well, if you break the frame, they are no good to anyone. But if the frame is O.K., I might sell it to an amateur or give it to one of my friends. After awhile a basket loses its power and is no good for professional use, but it is perfectly good for an amateur to learn jai-alai with.

OBJASY: What do you mean by "losing power"?

MAZZA: The basket tends to loosen up a bit, so that in throwing the ball, it is somewhat slower. A player might try to compensate by putting more shoulder action into it, but risks throwing his shoulder out or pulling a ligament. It is much better to replace the basket.

OBJASY: Could you reinforce the basket?

MAZZA: Yes. Actually, after we break-in a basket we slip in reinforcement reeds or ribs into the back of the cesta, to make them stronger.

OBJASY: Are all the pelotas the same?

OBJASY: Are your uniforms supplied by the fronton?

MAZZA: Our shirts are provided free but we must purchase our pants and sneakers. The fronton also provides free laundry service.

OBJASY: Have you played jai-alai in Europe?

MAZZA: Yes. When I was seventeen, after high, school, I played for two years as an apprentice in Spain. Then I went to Miami, Florida.

OBJASY: What is the lifespan of a player?

MAZZA: I would say fifteen years, figuring they turn pro at about twenty.

OBJASY: What about theatrics. Don't the players sometimes over-emphasize their plays?

MAZZA: Really, we're pretty serious on the court. There isn't that much room for goofing around. You see, its very, very competitive when you are out there on the court. When you get to game point you try to get that last point, and it always seems the hardest. No. I would say it's very competitive.

OBJASY: How do you like working at the Bridgeport Jai-Alai Fronton?

MAZZA: Very much. The company has done a lot for its players, including good wages, benefits and atmosphere.

OBJASY: What do you like to do when you're not playing? Do you enjoy other sports or hobbies?

MAZZA: I really enjoy car racing. I became interested in the sport through a friend of mine in Florida. At the time, we were racing late-model, small block Chevys at small tracks.

OBJASY: Do you enjoy music?

MAZZA: Yes, very much. I roomed with Yogi before I got married and we had hundreds of records and three stereos. I would like to learn to play the drums if I could find the time. My wife and I still enjoy music very much.

OBJASY: What is your most memorable moment playing Jai-Alai?

MAZZA: I think, when I won the Florida Amateur Championships when I was seventeen.

MAZZA: Once, in Florida, we were marching back after the introductory salute and one player accidentally tripped and about four of us fell over him. It was an embarrassingly big pile-up which I'll never forget.

OBJASY: I would like to thank you for this interview, but before closing, must ask you if you have any idols or players that you admire?